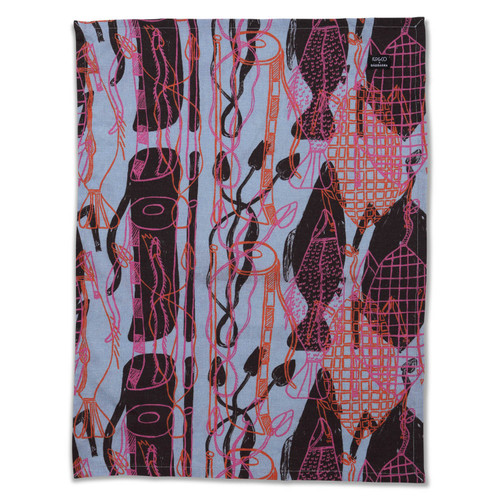 ABOUT THE ARTWORK:
Kunronj, 2007 ©Jennifer Wurrkidj / Licensed by Copyright Agency
These images are not to be reproduced without the approval of the licensor.
This artwork depicts important manme (food) from freshwater environments on Jennifer’s country and the traditional tools used to gather them. The kunkaninj (digging stick) is used to dig for wayuk (waterlily) roots, which are eaten fresh from the water or cooked on an open fire.
The kunkaninj is also used to find and dig freshwater komrdawh (long necked turtles) which hibernate on the floodplains during the dry season. Various fish species including the birlmu (barramundi) are hunted with a spear or trapped inside a woven fish trap. After they are collected and hunted, these foods are carried back to camp in woven dilly bags called kunmadj.

ABOUT THE ARTIST:
Jennifer is a Kuninjku artist from the Kurulk clan whose country lies around the outstation of Mumeka in central Arnhem Land.
Sister of Deborah Wurrkidj, the two women are the nieces (daughters in Kuninjku relational terms) of Australia’s most highly acclaimed bark painter, John Mawurndjul. The two women are renowned, in their own right, for their bark paintings, hollow logs and carved sculptures.
Jennifer’s artwork has been exhibited throughout Australia and her textile art is in the collection of the Art Gallery of South Australia.
Jennifer’s ancestor spirits are Dadbe (King brown snake), Djimarr (Black crow), and Buluwana (woman spirit being).

ABOUT THE COLLABORATION:
We are incredibly proud to share the Kip&Co x Bábbarra collaboration. The Bábbarra Women’s Centre is based in Maningrida, Arnhem Land, and is governed by women, for women, to enable future enterprises that support healthy and sustainable livelihoods. In 2018, we received an invitation to collaborate with the artists and have spent the last two years working closely with this incredible group to create a collection that respectfully showcases their contemporary art, and tells the ancestral stories of Arnhem Land countries and cultures. The partnership is best practice, and one that sets a benchmark for future collaborations. All profits are shared equally, with 50% going to the Bábbarra Women’s Centre.